SARA will be having an official launch and dedication of their newest inshore lifeboat to a lost colleague and friend Stuart Frost W26, on 21st January 2017 which starts at 1pm.

The event will be held at Stourport-on-Severn Rowing club where there will be a short ceremony to dedicate and bless the boat, SARA 26. 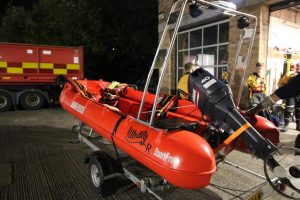 Following the ceremony around 1.30pm there will be photo opportunities and a short demonstration of some of the ways the boats are used during a search and rescue. This can also be viewed on the bridge if safe to do so.

You don’t often get the chance to see this, so don’t miss out, book it in your diary and tell us you are coming.

LIKE Us on Facebook to get notifications of rescues we get called to and on going training.

We often get asked who and what is SARA.

We have 4 stations Beachley, Sharpness, Tewksbury and Wyre Forest. At Wyre Forest we have 3 land rover defenders, 4 rescue boats, 1 incident support unit van and 20 operational crew members ready to go supported by 30 non-operational crew. We are directly called out by the police, fire or ambulance services to emergencies requiring our specialist skills in hazardous environments.

Every single member of SARA is an unpaid professional. We are one a few charities these days who do not pay any members. All crew do this around their regular jobs and family life, SARA becomes very much a way of life for devoted crew.

SARA is the largest independent lifeboat service in the UK – not in any way linked to the RNLI (Royal National Lifeboat Institute)- second only to the RNLI, with 15 operational boats, 9 Mobile Response Units, 4 stations and approximately 150 personnel.