On Saturday 22 October the Severn Area Rescue Association (SARA) will formally launch its latest lifeboat.
SARA Lifeboat 14 ‘The Maureen Easton’ will be Newport’s first official Lifeboat, declared as such to HM Coastguard and on call 24 hours a day, 365 days a year.

The boat will be based at SARA’s Newport operations base, which is located in the Malpas Fire Station, providing the City, its coastal areas and the Lower Usk with state of the art search and rescue facilities.

This new boat has only been made possible through a generous bequest from the estate of the late Mrs Maureen Easton.

It replaces SARA Rescue Boat 14, which will now be retired.  That boat was built in 1997; it served in SARA Beachley and Wyre Forest Stations before coming to Newport.

The Chairman of SARA Beachley and Newport Station, and Commander Area West, Mervyn Fleming, will lead the ceremony, together with the Mayor of Newport and members of Maureen Easton’s family.  The Newport Coxswain Rich Dainty will lead a demonstration of the new boat.

The Ceremony will be held at The Riverfront Theatre, Bristol Packet Wharf, Newport, NP20 1HG, starting at 10.00.  The lifeboat demonstration is scheduled for approximately 11.15. 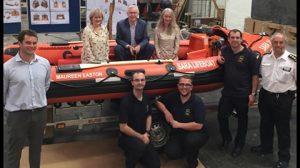 Statement from the family:

“Maureen was an amazing lady – a professional scientist, magistrate, school governor, ballroom dancer and a dedicated volunteer in the field of education. Although born in the West Midlands, she loved the sea.  In fact, past generations of our family were fishermen so this desire may be in recognition of the fortitude of earlier Eastons.  Our grandfather and father were Royal Navy Officers during WW1 and WW2 respectively.

Maureen was a sister who cared deeply about people and she said it was a privilege to care for our elderly parents at home.  She would spend many holidays in Weston–Super-Mare and her affection for this area grew stronger.  Maureen was determined to support a local organisation which saved lives at sea.  She was aware of the important role played by SARA as an independent lifeboat organisation assisting people affected by flooding.” 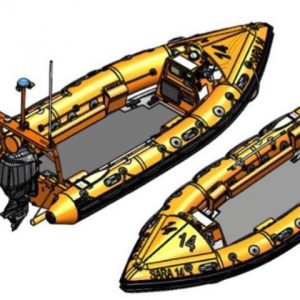 SARA Lifeboat 14 ‘The Maureen Easton’ has a number of features specifically incorporated into the design to meet SARA’s needs, and provides many advantages over its predecessor boat:Better deck space for casualty working