A wide range of SARA capabilities were tested on Sunday, starting with a full training exercise in the Lower Wye Valley.  The scenario was that a climber was injured high on ‘Fly Wall’ in Woodcroft Quarry near Tidenham.  All Beachley crew were called out from home and responded in real time. 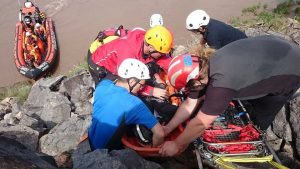 The first crewman was lowered down to the ‘casualty’ (Bob, the station’s full size rescue mannequin) and found a note explaining his injuries.  Having assessed the situation the casualty was ‘picked off’ and lowered to the base of the cliff where he was given first aid by another SARA Team.

Due to the difficult terrain, the SARA lifeboat was launched from Beachley. The casualty was stretchered away from the cliff and carried across the rocks down to the river, transferred to the lifeboat and whisked back to Chepstow – where in real life an ambulance would have been waiting. 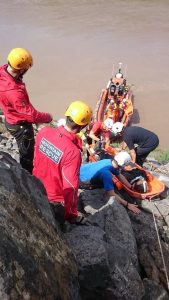 Station Commander Mervyn Flemming commented “we have sadly had to undertake rescues such as this in the past, so I was pleased that this went well. SARA is uniquely placed to fulfill this kind of complex task”.

With the exercise over, in the late afternoon the crews were briefly called out for a real cliff rescue, although stood down by the Fire Service before deploying. Further north, SARA crews from Tewkesbury and Wyre Forest were deployed for several hours on a missing person search, in support of West Midlands Police.