Devauden Running a Profit for the Village and SARA

Devauden Running a Profit for the Village and SARA

The 4th Devauden Races, held of May Day this year, raised just over a £2,000 for SARA, Severn Area Rescue Association, and the Hood Memorial Hall in the village.

SARA commander Mervyn Fleming accepted their 50% share from Race organiser John Brooks and committee member Sarah Trim. Watching on are her husband Matt and children Floelyn, 6, and Brereton, 4. Matt is wearing the race T-shirt awarded to those who completed the 10k course in under an hour while the children have their race medals given to all children that competed. Well over 300 children and adults took part. 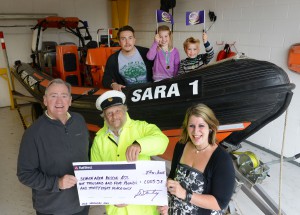 The Hood Memorial Hall committee plan to use their share of the money towards a new rustic play area for 2-7 year olds, plans for which are currently before Monmouthshire County Council.

This year neither the male nor female course records were broken so remain 36.05, set by Fairwater runner Mark Jennings, and 39.54 for the female record set by Chepstow Harrier Katherine Matthew. The prize money donated by Spectrum Internet was therefore unclaimed and went into the charity pot.

You can get a flavour of this year’s successful event by viewing a short video on
https://youtu.be/3UM89YQChnk

Next year’s race will be held on Monday May 2nd