SARA’s Land Search & Mountain Rescue teams from Beachley and Tewkesbury stations were called out on 04/04/15 at 23.50 by Gloucestershire police to assist in searching for a missing woman in the Wotton under Edge area of Gloucestershire.

Teams from Beachley and Tewkesbury were deployed, whilst still retaining crew back in their local areas to cover the Lifeboats if needed elsewhere.

The search teams were briefed by Gloucestershire police search specialists and deployed to various areas around Wooton under Edge to search for a missing 20 year old female.
“SARA Search Control” called for the assistance of South Wales Search and Rescue Dogs Association (SARDA).

At around 5am SARA called in fresh crews from its Beachley and Tewkesbury Stations to take over and assist the teams that had been out all night. At this point “Search Control” also called in Longtown Mountain Rescue team based in Abergavenny, South Wales to assist.

At around 11.30am on Sunday (05/04/15) the missing woman was located: she had suffered injuries but was conscious and talking and, after receiving medical attention from Paramedics, SARA and Longtown Mountain Rescue crews carried her out of the area to the waiting ambulance. 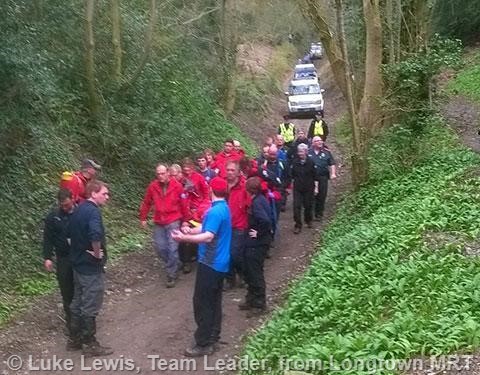 After a debrief with police the teams returned to their stations / homes to clean all the equipment and put it away ready for the next callout. Beachley crews got back to station at around 2.30pm 05/04/15 having been away for nearly 14 hours.