A year’s worth of fundraising and awareness support from Sainsbury’s Kidderminster has made a huge difference to the volunteers at Severn Area Rescue Association (SARA). Thanks to generous donations from customers and colleagues, the store has announced they have raised £13,968.12 in total. On Thursday 19th June colleagues from the store met up with the charity members at their Wyre Forest base to celebrate the successful partnership. 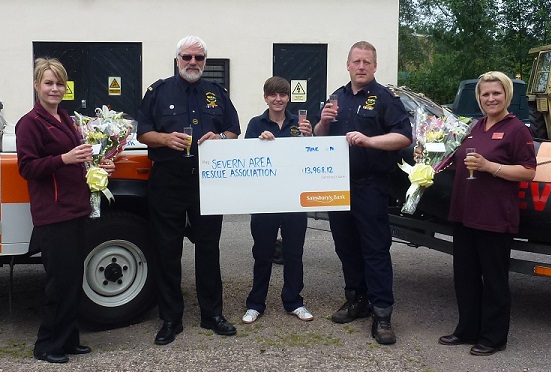 It’s been an amazing 12 months for the charity after they entered Sainsbury’s Kidderminster Local Charity voting process back in May 2012. For the last five years, the retailer gives customers nationwide the chance to vote for their favourite Local Charity, to be considered to receive a year’s worth of support from their nearby Sainsbury’s store.

Throughout the last 12 months, colleagues and SARA volunteers held several activities to raise funds and awareness of the charity’s cause. These included quiz nights, rowing the length of the River Severn in the stores foyer, an ongoing book sale, bag packs with the Mayor of Kidderminster, a bingo evening and much more.

“Working with the staff at Sainsburys Kidderminster has been nothing short of phenomenal. We are so proud of the support from the staff and their enthusiasm for fundraising for SARA has been incredible. We have done some amazing events; including rowing the length of the River Severn and climbing the equivalent height of the three peaks. Raising nearly £14K is amazing and will ensure we can continue to provide our life saving services to the communities. Thank you to Sam, Helen and all the staff and customers and Sainsbury’s Kidderminster, and my volunteer crew for their support”.

Despite the partnership coming to a close, it doesn’t mean that the charity will now be forgotten. Staff have built an exceptional relationship with volunteers over the past year, and look forward to working with them in the future.

“It has been a pleasure working with Steve, Paul and all the volunteer crew at SARA. The amount that we have raised this year has shocked everyone and we are thrilled that it is going to such a good local cause”.