From Thursday 05th to Sunday 8th of August members from Wyre Forest provided first aid cover for a Country and Western event at Stratford Racecourse hosted by the Redditch Westerners. 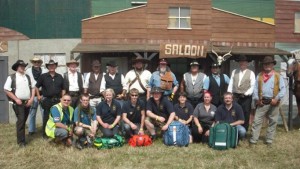 Gunfighters from the Redditch Westerners with SARA Wyre Forest Members

Formed in 1998 Redditch Westerners are one of the largest Western Clubs in the Midlands – with many of their members being “authentic” westerners – with gunfighters, Indians and “Mountain Men”.

This is the 3rd time SARA has provided first aid cover to the Blue Rodeo event at Stratford Racecourse – now hailed as the biggest event of its type in the Midlands with a large outdoor stage, replica western town and gun fighting arena.

Crew from Wyre Forest attended and set up a First Aid post complete with Ambulance and Minor Injuries and Treatment centre and provided 24hr cover including foot patrols for the duration of the event whilst open to the public. Thankfully the skills of the team were only required to treat minor injuries including minor burns and insect bites – but still managed to treat 20 patients and raise over £400!

At the end of the event the flags from all participants and the “States” they represent were paraded around the arena. SARA was represented by Dan Gale, WF Secretary bearing the SARA pennant.

Wyre Forest have now not only been asked to cover the event again next year but the crew have been invited to attend one of the monthly social events the club holds to let their hair down and enjoy themselves!